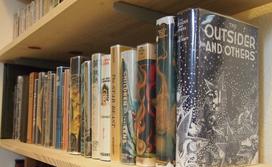 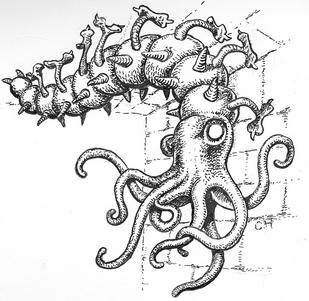 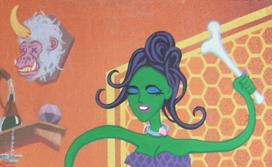 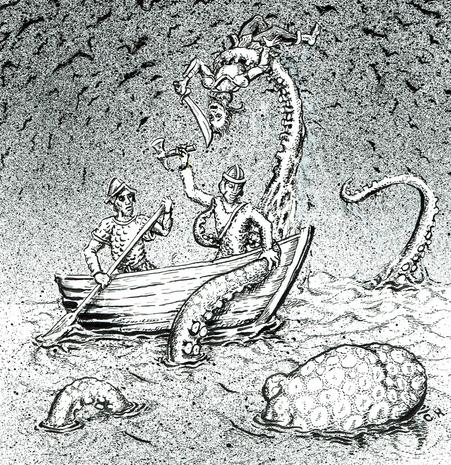 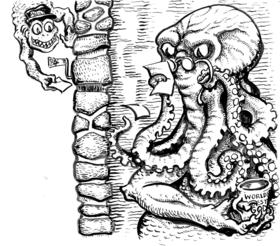 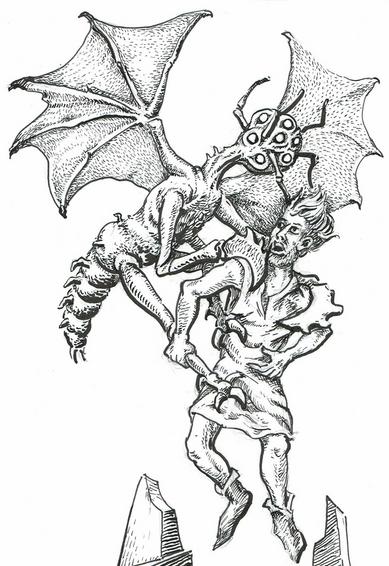 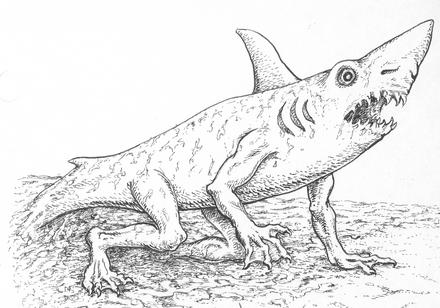 I am not sure how Boinger, Zereth and Murry survived these monsters but I'm pretty sure it involved running away.  This was the first time I experienced fear in a role-playing game.  It was also the first time I experienced the death of a character, my dwarf.  I commemorated the event with a drawing in colored pencil.  Dad had bought rubber toy sharks for this adventure which were about four inches long and big enough to shove our lead figures down their throats.  I wonder now if he conceived of weresharks before or after buying these toys.

Dad wrote up our adventure in a story for the fanzine "Alarms and Excursions" and I provided an illustration.  It is very likely that Gary Gygax and others at TSR read Dads article.  Gary often wrote letters to "Alarms and Excursions" as I learned from reading Jon Petersons "Playing the World".  Dad never wrote out his statistics for weresharks, which may be one reason they did not make it into the original "Monster Manual".  It is also possible that Gary forgot about them until he needed something for the "Monster Manual 2" or perhaps he felt some twinge of guilt about appropriating them without credit.  Not very likely.  The creature in the Monster Manual 2 is illustrated by a angry looking shark with no humanoid arms or legs.  Dads creation which he describes best in "Maze of Peril" has thick muscular arms and legs with which to drag itself onto land."  The popular version of the creature described in "Pathfinder" is a humanoid ogre-ish monster with a sharks head and fin.  I have always pictured them crawling rather than walking; which to me would look silly.  I do like the figure made by Reaper miniatures for the Pathfinder wereshark.  It was this miniature that made me realize that weresharks had had a life beyond their appearance in the little known "Maze of Peril".

Chris Kutalik credits my dad as the creator of weresharks in AFS Magazine #3  Chris gives statistics for them which include two attacks; bite and clawed arms and two types of movement on land and water.  He expands upon them further in "The Slumbering Ursine Dunes" in which an intelligent wereshark and his remoras is a major character.

The point of this reminiscence is actually to ask a favor of John Eric Holmes fandom.  When I visit Wikipedia's listing for were sharks, Dads contribution is not mentioned.  When I search images of were sharks on Google I find no drawings by Chris Holmes or David Johnson.  Zachary Howard of the "Zenopus Archives" has also encouraged me to write this piece in order to set the record straight.  I feel it is time for credit to be given to the creator of a monster that has brought much joy to the heroic fantasy community.

The Books of John Eric Holmes

Sometime during my childhood my Dad told me a Hawaiian legend of the shark man.  A village was experiencing a number of shark deaths among its swimmers.  Suspicion fell on one man who may have been a better swimmer or fisherman than the others.  He had the odd habit of never taking off his shirt, even when swimming.  The men of the village seized him and tore off his shirt to reveal a fanged shark mouth on his back.

​Over ten years later our D&D group encountered Dad's weresharks in our second or third game in his dungeon.

The Ruined Tower of Zenopus

This is the website of Chris Holmes the artist and sci-fi lover.   I'm somewhat known for being the son of John Eric Holmes, the author of  a number of  sci-fi and Dungeons and Dragons works.

​ Hey folks, I’m an illustrator.  Do you need an illustration for your game, book or wall?

My prices are very reasonable, so if you have any interest/need, send me a note via the contact link above.  Here’s what I’ve worked on lately:
​​