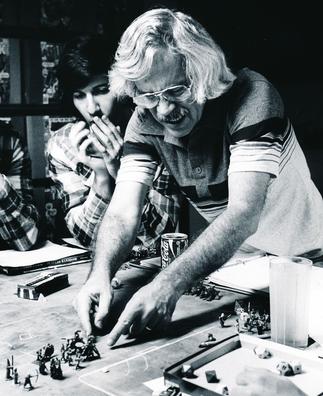 H.P. Lovecraft was Eric's most treasured writer.  A close second to Lovecraft in the horror-fantasy category was Clarke Ashton Smith, who was also a favorite poet of dad's.  He read everyone in the "Lovecraft Circle" and his favorite of Lovecraft's influences were William Hope Hodgson and Arthur Machen.  He loved Abraham Merrett, whose work lies somewhere between Howard and Lovecraft in style and substance.

I am sure I am forgetting some of his favorite authors, as it's almost impossible to think of a science fiction fantasy writer he didn't like.  He was not a big fan of Jack Vance or Michael Moorcock, perhaps because of their moral ambiguity.  He liked Phillip K. Dick although he found him a bit depressing.  His favorite pulp hero, next to Captain Future, was Doc Savage.  He also enjoyed the Shadow, the Spider, the Avenger and Fu Manchu.

He loved historical fiction of any military period predating gunpowder.  One of his favorite De Camp historical novels was "An Elephant for Aristotle".  He preferred stories involving medieval Japan, the Romans and Mayans.  His favorite poets were Rudyard Kipling, Clarke Ashton Smith and Shakespeare.  His favorite detective was, not surprisingly Sherlock Holmes, though he also liked Nero Wolfe and Hercule Poirot.  He enjoyed "mash-ups" like "The Seven Percent Solution" and sequels and pastiches like August Derleth's "Solar Pons".  He was very enthusiastic about Phillip Pullman's "Dark Materials" trilogy.  Towards the end of his life, he was inspired to read "Paradise Lost" and the "Iliad".  I hope nothing so ambitious ever occurs to me.

Any questions you may have about his books, his writing or his life I will try to answer.

On the following page (The Books) is a list of hard cover books that represents a fraction of my fathers collection.  These are books for sale that I thought most interesting because of their age, publisher, and/or the authors signature.  If you are interested in a particular book, please email me and I will send info and photos.

For those of you who share Eric's tastes in science fiction, fantasy, horror; and historical fiction, here is a brief summary of authors he loved.  He started collecting pulp magazines and a few hard covers as a teenager in the 40's.  I believe Edgar Rice Burroughs was his first literary love.  The Mars series was his favorite, with the Pellucidar series a close second.  Eric's first favorite fantasy writer was probably Robert E. Howard.  He loved Conan the barbarian in all of his iterations and even liked Thongor by Lin Carter.  Of the heroic fantasy writers, a close second to Howard was L. Sprague De Camp who he tried to emulate in his Boinger and Zereth stories.  In the 50's, Eric discovered and fell in love with J.R.R. Tolkien.